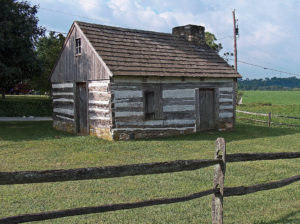 The Byerland Mennonite Church began in a small log building that was built in the early 1700’s.  The date that is most often referred to for the founding of this church is the year 1724.  The church was built on the land formerly owned by Hans Boyer, from which the name Byerland (Boyer land) received its name.  In 1848, a stone church was built to replace the log church.  Then, in 1879, a brick church was built using the stones from the original church for the foundation of the current brick church.  Further remodeling of the first brick building brought it to where we have the building as of today.

The congregation in it’s beginning was closely associated with the New Danville Mennonite and River Corner Mennonite churches.  Therefore, one can hardly talk about the history of the Byerland Mennonite church without also referring to these other two churches.

In 1756, Martin Boehm, a 31 year old farmer, was ordained as one of the earlier ministers for the New Danville and Byerland churches in southern Lancaster County.  He struggled unsuccessfully to preach effectively.  He was unable even to quote scripture that he had memorized.  Sunday after Sunday he experienced this dilemma of not being able to preach.  After a period of about 2 years, something happened that Martin would never forget.  He was out in his field plowing when the Lord impressed upon his own heart that he was “lost.”  He cried out to God for mercy and experienced a wonderful salvation.  His heart was filled with joy and peace, and his tongue was loosened to preach.  From that moment on he preached powerful salvation messages, which began to draw large numbers of people to the services.  A sense of revival and spiritual renewal was born in the New Danville and Byerland churches. By 1761, he was ordained Bishop.  His message continued to be one of “repentance accompanied by a deeply felt Godly sorrow.”

On one occasion in 1767, Martin Boehm, preached to a crowd of 1,000 at the Isaac Long Barn just North of Landis Valley.  Following that powerful sermon, a Swiss Reformed pastor, Philip Wilhelm Otterbein, theologically trained in Germany and whom pastored in York PA, stepped forward to greet Martin Boehm.  This tall man enthusiastically embraced Boehm who was short, bearded, plainly dressed, a Mennonite, and said that “we are brethren.”  Boehm’s influence in the church and community increased as he continued to preach. However, some of his fellow bishops became concerned and offended by some of his statements and practices, along with his associations with non-Mennonite brethren.  Boehm was finally silenced (excommunicated) in 1777 by his fellow bishops for failing to cooperate with them on the issues that they were not able to see eye to eye on. On June 26, 2016 Martin Boehm was reinstated as Bishop emeritus to Lancaster Mennonite Conference. This was done during a special service at the Boehm’s Chapel, located on West Boehms Road in Willow Street, PA.

Moving forward 100 years later to 1891, we find that Sunday school began as a way to meet the need to teach children and youth the Bible.  New Danville and Byerland churches would alternate every other Sunday for hosting the Sunday school. River Corner Mennonite Church would also host, alternating morning and afternoons with the Byerland church on their turn for Sunday school.  In the year of 1940, Byerland began to have its own Sunday school every Sunday with the preaching services held every other week.  At some point after 1953, the preaching services were also held every week at Byerland.

In terms of membership there was no complete list from the earlier years.  We do have a record as early as 1883 that records the names of 68 persons who were members of the “Byerland District”, now known as the Byerland Mennonite Church.  By January 1940, the membership was recorded at 193 persons.  By 1972, the membership dropped to 168 persons and by 2004 were 104 persons.  2015 the membership was 109 persons.  Sunday morning attendance averages 100-110. 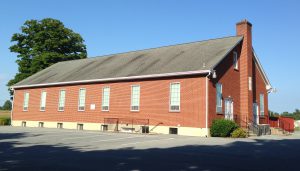 The congregation has embraced people from varying denominational and ethnic backgrounds.  Each person’s spiritual and cultural backgrounds bring a wonderful variety to the Byerland fellowship.